Another three weeks of school are over, just three weeks until we leave for Hanoi. Time can be such a warped thing. Physically it is measured in constants; but in actuality, the 3 months we have been here at YWAM Kona, frequently flips between feeling like 3 years or 3 days. The 3 weeks until we leave will fly by. Ready or not we will be on the aeroplane, fortunately He equips the called! Here is some breaking news, our team will be returning to Kona without us. as Glenda and I are planning on staying in Vietnam until we return to Alberta on June 20th 2017.

Dave Bryan, and his team from the Church of Glad Tidings in Yuba City, were back teaching on Spiritual Warfare and Deliverance. The teaching really is a vivid reminder of the battle between good and evil both in the world and within our head, and equips the students (and staff) with the tools needed to fight the war. Dave has a lot of experience as a somewhat reluctant participant. You can read of some of his experiences in his book “The Serpent and the Saviour.”

Jean Norment shared her message on Unveiling the Cross, Jean has spent more than 30 years researching the Cross and has many experiences of clinging to the cross. She teaches how the Cross must be the centre of the Christian life.

One of the most amazingly spectacular sunsets we have seen in Hawaii appeared on Sunday November 20th. This photo was taken from a friend’s back yard further up the mountain than the YWAM base. We had been invited for a BBQ and were enjoying an awesome meal with Ken as the sun was setting.

Danny Lehmann, a long time YWAMmer, now part  of the Campus Leadership Team here at the Kona base, spoke on Evangelism. He always gives away copies of his book “Beautiful Feet: Steps to a Lifestyle of Evangelism” to all the students. Much of his teaching comes from the Bible, this book and his life experience as an equipping evangelist. As I look over my growing list of book recommendations from YWAM it is obvious that Danny is a prolific reader. The fact that “Readers make Leaders” is a truism evidenced in Danny’s life.

Last Thursday was American Thanksgiving, we had a turkey dinner with over 1000 family at the Aloha Lanai cafeteria, here on campus. The dinner was preceded by a campus wide thanksgiving service, Darlene Cunningham shared the message. It was her first public engagement since August when a bad lung infection almost took her life. Gladly she was back to her old self as she shared the miracle stories that have led YWAM to the place it is today. A huge organism of over 20,000 full-time mission workers, with over 1100 locations in over 170 countries that is involved in huge initiatives world-wide and collaborates with many other organizations for the benefit of the global mission. 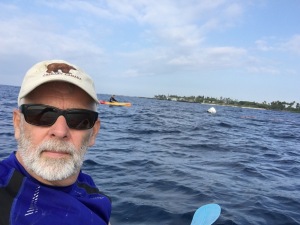 I have had a couple of opportunities to go kayaking here in the Kahului Bay, a couple of Saturday mornings. Heading out early we can can paddle a couple of hours and get back to base in time for brunch. A couple of weeks ago, we had about 40 or more dolphins out with us. Last Saturday, no dolphins but the adventure continued as we had some great swells in the ocean with waves breaking over the bow of the kayak on occasion.

Each Tuesday morning we gather in the Prayer Room for family worship and intercession, it has been awesome to have the teens and children involved in leading the worship, great kudos go to Brian and Cristina, two of our students, who have done an amazing job of getting the young’uns involved. 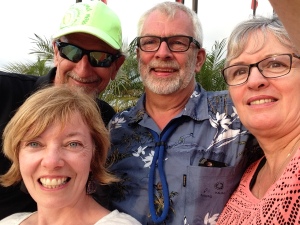 Last week some good friends from Calgary took time to visit us on campus while they were vacationing on the Big Island. We have known Dennis and Dayna since my first mission trip, in Nov 2002, when we served together in Santiago, Chile. A year after our time in Chile, they attended Cursillo  weekends in Calgary and so our paths continue to cross. It was great to be able to share a couple of hours with them, to show them around the base, and catch up on all that is happening in their life.

Until next time be blessed and be a blessing, A&G

A couple more from last week.
Cloudy and drizzly morning in Kamloops, BC